When the Milltown Dam upstream of Missoula, Montana came down in 2008 and the impoundment behind it was drained, a hidden treasure trove of century-old lumber was revealed. Hundreds of logs, buried in sediments, had been accumulating behind the dam throughout its life. The lumber had been cut from the surrounding forests during the early years of the twentieth century and had been temporarily stored in the river by the local sawmill.

The sediments in which the valuable logs had been preserved were the reason why the dam had to go. One hundred and twenty miles upstream from Missoula, the copper mines and smelters around Butte and Anaconda had for decades deposited a steady toxic cargo into the Clark Fork River. The cargo had been carried for miles downstream in the form of runoff laden with heavy metals and oxides before it ran into the first barrier it encountered, the Milltown Dam.

Originally the dam had supplied a small amount of electricity for the nearby lumber towns of Bonner and Milltown. A century after it had been built, the concrete barrier was no longer serving any real function beyond providing storage for a toxic load that, if ever released, would poison thousands of wells and hundreds of miles of fish habitat downstream. An ice jam that formed behind the dam in the spring of 1996 convinced engineers that a major accident was imminent. At that point, the nation’s Superfund law kicked into gear and the dam’s future was sealed.

The removal of the dam took about five years and the restored site is still in the process of revegetating. Although there was lots of controversy about the handling of the dam removal (including questions about both environmental justice and corporate cronyism) everyone was delighted at the unexpected bonus of the hundreds of high quality fir, larch, and pine logs that became available.

After washing off the sediments and allowing them to dry, these old-growth behemoths have been put to use in numerous civic projects dotted around the area. The tight growth rings of the big logs and the lack of decay they experienced when encased in the sediments meant they are still suitable for both structural and decorative roles in all kinds of construction.  A set of shelters have been built in a local park at an old lumber mill site, one of the many artful results of the reclamation of the “sinker logs.” Out of one impending ecological and industrial disaster have emerged some unexpected objects of real beauty.

Ten miles off the Alabama coast, a different story involving the recovery of ancient lumber is also playing out. A few years ago, fisherman in pursuit of the Gulf’s famous red snapper found a spot that seemed to be unusually loaded with their quarry. When divers went to explore, they discovered what appeared to be tree stumps littering the sea floor. “It’s just a forest transplanted to the bottom of the ocean,” declared Ben Raines, the environmental reporter and video documentarian who recently told the story to NPR.

It turns out that the wood belongs to bald cypress trees (Taxodium distichum). The underwater stumps still possess the tell-tale ‘knees’ that characterize today’s southern cypress swamps. What is remarkable about the remnants is not just that they create the ghostly appearance of a southern forest located sixty feet below the ocean surface. It is the fact that the stumps are estimated to be as much as 60,000 years old.  Kristine DeLong, a paleo-climatologist at Louisiana State University, characterizes it as a “perfectly preserved time capsule of an ice age forest.”

Most ice-age forests were destroyed long ago, if not by the millennia of grinding glaciers then by the rot that sets in when dead trees are repeatedly exposed to water.  But like the sinker logs  preserved behind the Milltown dam, the trees off Louisiana were buried – and maybe reburied – in protective layers of sediment as glaciers melted and rivers filled bayous across the South with a preserving silt.

As the ice continued to thaw, the oceans rose and the hidden forest disappeared under the waves. The sludge that surrounded these underwater remnants preserved them in a low-oxygen environment until it was washed away by one of the powerful gulf coast hurricanes of the last two decades – most likely Hurricane Ivan in 2004. (At 98 feet, the waves caused by Category 5 Ivan were the highest ever recorded).

The newly exposed underwater forest is now providing a wealth of information about how vegetation responds to rapid changes in climate like the one we are currently experiencing. Researchers are learning not only from the wood but also from the pollen and remains of various organisms extracted from the sediments that surround the stumps.

These two tales of ancient wooden treasures, contain lessons on how humans might think about climate change today. The Louisiana forest connects with climate warming in two places; first, when the forest got covered in sediment tens of thousands of years ago through the process of natural warming, and second, when the stumps were uncovered by huge hurricanes powered by the current phase of human-caused warming. 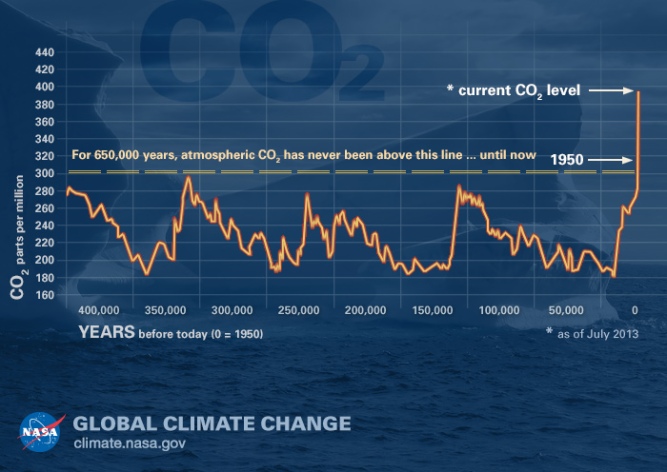 The fact these logs off the Gulf Coast date from a time when sea level was an estimated 250 feet lower than today should signal just how dramatic the impacts of climate change might be.  At the time this forest grew, atmospheric carbon dioxide levels were around 200 parts per million and were in the process of experiencing a slow decline. Today they are close to 410 ppm and are rising at an unprecedented rate. Two hundred and fifty feet is a considerable depth of water to find layered above your head.

The Milltown Dam sinker logs, by contrast, raise hopes about the process of restoration and repair. They speak volumes about the value of recognizing an impending disaster and investing serious money into avoiding it. They also indicate how such investments often bring unforeseen bonuses. The logs extracted from the sediments behind the dam retain their beauty and integrity even after being put through a century of human-caused drama.

The human-caused drama we are embarking upon with climate warming will last much longer than a century. The realities of climate restoration are also much more challenging than those of dam restoration.

Still, it is worth imagining a future in which we had managed to dial back the atmospheric carbon clock. One might wonder what kinds of beauties and integrities might be forthcoming from a concerted effort at climate repair.

In the meantime, it should come as little surprise to hear from reporter Ben Raines that profiteers have been begging for the GPS coordinates of the underwater forest in order to make a quick buck off the Pleistocene wood.