Imagine a lizard trying to scamper away from a predator but being unable get a grip on a smooth floor.  The cartoonish image of hind legs working fruitlessly to create forward motion has been replicated on actual lizards and filmed in the lab by Kristin Winchell, a post-doctoral researcher at Washington University in St Louis.

This scene from a Tom and Jerry cartoon is indeed the fate of lizards that have taken up residence in urban environments. In cities, the concrete and tile surfaces the lizards frequently encounter don’t offer the friction of the dirt and bark forests from which the originate.

Fortunately, we don’t have to feel sorry for the lizards for too long. Winchell’s research has shown that evolutionary pressures are leading the lizards to quickly develop more sticky feet to give them greater purchase on urban surfaces. Sticky feet will let you survive long enough to breed. Slick toes will see you disappearing down a predator’s gullet in short order.

The lizards’ adaptation is just one example of evolution at work detailed in the new book Darwin Comes to Town by Menno Schilthuizen. As the non-human biota enter more and more of the environments that humans have built for their own comfort, behavioral and evolutionary creativity is hard at work making their survival prospects in man-made habitats brighter.

Sparrows have grown shorter wings to assist their take-off when they need to escape on-rushing cars. White-footed mice in Central Park have changed their metabolism to better handle the fatty foods that New Yorkers discard on their foraging grounds. Dark-eyed juncos have become less brightly colored and, at the same time, less aggressively territorial as the abundance of food in the urban environment has made life altogether much easier for them than in their original forest homes.

The story told by Schilthuizen is tinged with both hope and despair. On the one hand, it seems tragic that human misdeeds such as wasted fast-food can penetrate the DNA of species that choose to live near us.  On the other hand, it is wildly exciting that the forces responsible for creating this beautifully complex world are continuing to operate with vigor and originality on our fellow-travelers. Nature’s creativity and flexibility continues to astonish us, even in the midst of the numbingly pervasive influence of humanity in the Anthropocene.

One of my favorite examples is the adaptive talents of the peregrine falcon. Not only has this spectacular raptor recovered from near extinction in the nineteen-seventies before DDT was banned, on its return it has adapted cunningly to the new world in which it finds itself.

First, it appears to be just as happy nesting on tall skyscrapers as it used to be nesting on sheer cliffs. The view is just as advantageous when the snack-box is laid out beneath you. In addition, the peregrine has learned how to take advantage of urban lighting to develop a new tactic for capturing its prey.

Instead of the two hundred mile an hour “stoop” from above that peregrines used to employ for killing hapless ducks or pigeons flying beneath, peregrines are now taking  advantage of how city light illuminates the bellies of birds that commute after dusk. The falcon often now attacks unsuspecting birds from beneath, flying up towards the lighted belly of its prey before twisting at the last minute to sink its talons into the unsuspecting bird’s breast. Urban falcons have developed urban smarts. (I discuss other consequences of the “end of night” in my new book The Synthetic Age).

English science writer Fred Pearce has called these sorts of developments “the new wild.” Pearce celebrates not just the continuation of powerful evolutionary forces as they reshape the genomes of animals living amongst us. He also celebrates the scrappy inventiveness of opportunistic creatures that find themselves confronted with new challenges. 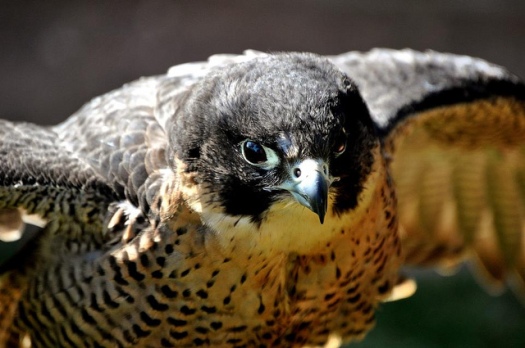 In celebrating the new wild, however, there is one mistake I think it easy to make.

It is tempting to wrap the idea of the Anthropocene together with the idea of animals more and more shaped by human works and come to the conclusion that the category of “the natural” no longer exists.  If everything is shaped by humans – the climate, the lizard’s feet, the peregrine’s attack strategy, the polar bear’s ice pack – then what reason is there to hold out for the preservation of a wild nature that stands apart from humans?

Such thinking is increasingly common but unfortunate.

In the first place, human influence is relative.  Some places, think of the concrete canyons made by the tall buildings of large cities, are heavily influenced. Others, think of the interior of Montana’s Bob Marshall Wilderness, are only lightly affected. Humans are quite capable of keeping their impacts in some areas minimal. They are also capable of repairing the damages they have caused in others.

Second, to extinguish the category of the (non-human) natural from the lexicon would be to remove an idea that, in largely unspecified and unspecifiable ways, helps humans make sense of their place in the world. Jason Mark, author of an excellent book about the wild in a human age, has warned that eliminating the notion of a natural “other” that puts our lives in perspective creates the risk of narcissism and insanity. Wild nature, Mark suggests is “a touchstone for our relationship with the rest of life on earth.”

Schilthuizen provides an even more sobering counter-argument against thinking it is okay to humanize everything.  In addition to all the creative hybridizing and inventive behavioral changes that cultural environments force upon wild animals, there is also a lot of death.  Schilthuizen reminds us that:

“the ones that we see evolving are just a few species that were lucky enough to have some variants that were able to live under these artificial conditions…. Behind that is probably a much larger group of species that were not able to adapt to the change to the environment that we create.”

By all means celebrate nature’s creativity. But don’t forget the attending costs. Amidst all the evolutionary wonders on display, there remains an awful lot of heartache.

One Reply to “Sticky Feet in an Anthropocene World”