These were my self-directed words of encouragement as I decided to take the right turn and head one final time up the hill of the outer ski loop. I had been keeping my eye on the clock as I had to pick my wife up from the airport in less than an hour.  I had also been keeping an eye on the approaching darkness since any cross-country ski after work at this time of year had to be short if you didn’t want to be fumbling around in the dark by the time you got back to the car.

The choice for one more lap, however, was not exactly difficult. The jolt I was getting from the endorphins and serotonin flooding my system when working up that outer hill was hard to resist. The sound of snow passing under my skis when speeding back down through the ponderosa pine and Douglas fir forest was its own powerful drug.

I love winter and being out here on public lands in the evening light when most people have already headed home is about as good as it gets. I was also aware that the chance of seeing animals was creeping up with every minute I remained outside.

By the time I had completed the outer loop and was on my way back to the parking area the faint light had almost gone. Ahead of me I saw a similarly motivated skier heading my way.

“Did you see the bull moose?” he asked as he skied past. Apparently one had just crossed the track nearby a minute or two ago.

“Nope.” I looked back towards where I had just come from and saw nothing. “Here are the tracks” the disappearing skier yelled back to me over his shoulder. I turned around and skied over to the spot he had indicated and there indeed were some moose tracks leading directly across the ski trail and into the trees occupying the center of the loop.

Something intangible in the dusky atmosphere shifted ever so slightly.

I maneuvered myself so that I was pointing in the direction the moose had headed and took a careful stride off the trail, peering forward in the direction he had walked. I opened my eyes as wide as I could to gather up every piece of available light and carefully scanned the trees, willing the appearance of a bull moose looking back at me from a comfortable distance.

For a moment, I became a different being. I craved the sight of those giant upturned bowls that serve as antlers, the massive haunches covered in a dark fur, and the absurdly big nostrils. I imagined spotting the dewlap, the strange-looking flap of skin hanging under the moose’s chin whose function remains a mystery to biologists, but which surely serves to communicate messages of power to competing bulls or compliant females.

As I willed this vision to appear, the woods regained a vitality that had dulled slightly during the last hour of inward-focused skiing. I listened to my breath, to the sound of snow, and to the encroaching darkness that was starting to swaddle me as its intensity grew. I waited.

I didn’t see the moose, of course.  Probably better for all involved.

The moose’s no-show was fine. Wildlife is always exciting when you see it. But a proper sense of the wild makes it exciting even when you don’t. Knowing the moose was out there, seeing its sign, and hearing whispers of its presence is sometimes enough.

In its etymology, the word wild traces back to the idea of “self-willed,” and certainly not “willed-by-humans.” If humans could control the appearance of the wild then, by definition, its wildness would disintegrate instantly. In the case of the moose, I was making a vain attempt to will something that was resolutely self-willed. In this battle of wills, it was important that I lose.

Sometimes, by luck and good chance, my desire for a glimpse of a moose may coincide with the movements of these long-legged tenants of the woods and streams. I will take those moments as gifts. I will take moments like the one on my evening ski as a different kind of offering for my soul.

When I got back to the car, fumbling for my key in the dark, a guy was just setting off in the direction from which I had come. He had skis over his shoulder and a headlamp on his head. I recognized him as an acquaintance and we exchanged a few words about the night-time adventure he was about to embark upon and about the moose I knew lurked somewhere in the woods he was about to traverse. I had no time to linger, so we quickly said our goodbyes and took off in our different directions. 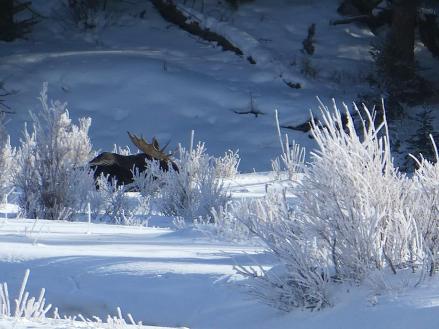 As my car picked up speed down the snow-covered hill back into town, a surge of animal excitement powered through my veins and caused an involuntary howl to emerge from my mouth. It was directed at some place I did not choose, the shadows of the passing trees, perhaps, or the crystals of snow that draped the rocks by the roadside.

My animal self surprised me a bit with its wildness. But I’m glad it showed up. It had chosen its own moment to burst out of its civilized frame, wanting a bit more space to roam and maybe some better company to keep as darkness settled. It was a wild soul seeking communion, I suspect, with the moose it knew stood knee deep in the snow somewhere just out of sight.