There is no escaping it. Climate change makes demands on affluent lifestyles. They range from the trivial, to the mildly disruptive, to the highly annoying. Over time these demands have evolved.

Swapping out incandescent light bulbs for compact fluorescents – now LEDs – was an early demand. Turning the heating or A/C down a notch was another immediate ask. Driving giant SUV’s and living in enormous air-conditioned homes, Al Gore style, quickly joined the list of the distasteful.

More recently, the options have multiplied. Weatherizing your home and reducing waste is high on the ticket. Solar panels and electric vehicles have become the responsible choice for the increasing number of homeowners who can afford them. Gratuitous flying is now a no-no – a climate cost that can be mitigated to some extent by the purchase of carbon offsets. Driving less has remained a badge of honor. Lobbying your utility, voting for the right people, and limiting family size can all show up in different parts of the package.

While generally endorsing this list, a quick qualification is essential for all greenhouse gas do’s and don’ts. The idea that any collection of individual actions can solve the climate problem on its own is delusional. With just one hundred companies responsible for emitting 70% of greenhouse gases, it is a mistake to think individual action is the answer. Regulatory and institutional reform must take place on a massive scale to make any serious headway on the problem.

The report released by the IPCC last week on climate change and land use adds another important lifestyle demand. We need to change dramatically how we use the land. As Robinson Meyer makes clear, there is a finite number of square miles available to provide all the energy, do all the carbon sequestration, and provide all the ecological services needed by the human population. (This is to say nothing about the neglected needs of wildlife). We are not using that land smartly at present and there is very little wiggle room.

One thing affluent countries simply cannot afford to do is to use such a high proportion of this limited land to grow cows. Their methane-laden burps and farts, together with the resources that go into their production, add too great a cost to the climate ledger. Meyer is blunt. “To really succeed,” he says, “it will require hundreds of millions of affluent people in the Northern Hemisphere to change their diet, eating many more plants and much less meat—and especially much less red meat—than they do now.”

I have a lot of climate conscious friends.  It is remarkable how few of them think seriously about eating less meat. Meat-eating seems to be up there with baking apple pie as an unquestioned American good. The US Republican party has used the threat of reducing burger consumption as a hammer with which to beat upon those advocating for a Green New Deal.

I see two reasons why this cudgel has been so easy to pick up. Vegans and vegetarians have done the climate cause no favors by years of setting the bar too high. The suggestion it is a sin for meat to ever touch your teeth may be mandatory for an adequate animal rights position, but it is highly damaging for a climate one.

Complete moral purity is an aggravating demand. Abstaining from meat entirely is not required by sound climate policy. Reducing meat consumption is – a fact your family doctor is very likely to agree upon. If a person is causing harm, cutting the harm in half or a third is a dramatic step in the right direction. It may not be critical for them to entirely eliminate the behavior.

A second reason why the threat of confiscating burgers is so powerful gets to the heart of the IPCC report. Meyer puts it this way: “…land is different. It is home, and the possibility of home. The relationship between people and land is the most treasured and unresolved idea in global politics.” For many people, meat-eating sits deep. It connects them to family, to their memories of growing up, and to traditions they value. Meat can be a bodily conduit to the land, a way for people to feel they belong somewhere as they chew.

The IPCC is more detached than Meyer but still on point. The land supplies “the principal basis for human livelihoods and well-being, including the supply of food, freshwater and multiple other ecosystem services, as well as biodiversity.” It gives us everything. For many people, eating meat is a subconscious way to feel that gift. The result is that calls to eliminate meat from a diet have been difficult for some people to hear.

The good news is that the needle might be moving on its own. More realistic vegetarian burgers are rapidly capturing market share. New forms of cultured meat may be on the horizon. The fact that both personal health and economic self-interest align with eating less meat certainly helps. In some circumstances, eating wild-harvested deer and elk provides a viable climate work-around.

Like many of the climate steps an individual can take, the call to eat less meat is a put-off for some. But the IPCC are not wrong. A large amount of land will need to be repurposed away from growing cows. This is non-negotiable.

The question is not “whether” but “how,” how to deliver this message in a way that does not make big meat-eaters hurl. 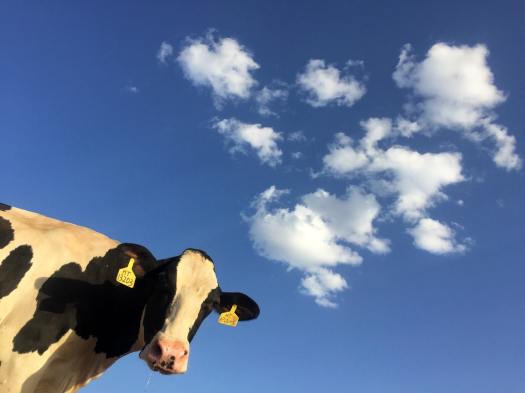