I can’t get out of my mind the image of two men in wool sweaters, each with a giant cod slung over their shoulder, walking across a snowy Norwegian mountainside in a late winter storm.

The image was placed there by my friend Erik’s kindly mother. She had just served lunch to us in her farmhouse on Vestvågøy in Norway’s Lofoten Islands as a blizzard howled outside. A generation before, the two relatives made the trip she described numerous times on foot as they came home to their families from one of the coastal fishing ports a few kilometers away.

Between January and April, the fishing villages on the islands would have been awash with Norwegians from all over the country who descended on the area to risk their lives venturing out to sea in small fishing boats. Their quarry was ‘skrei,’ a migrating cod that arrives off Lofoten in big numbers every year from the Barents sea. Judging by our experience trying to walk outside in the snow after lunch, the evening hike across the mountains in winter with a ten pound fish on your back was not for the faint of heart. 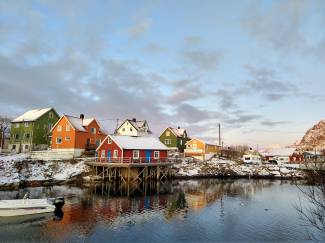 I had wanted to go to the Lofoten Islands for exactly twenty-five years. I know this so precisely because the moment coincided with a class in graduate school where I learned one of the things that makes Lofoten special. According to my environmental politics professor, the fishermen of Lofoten were one of the few people in the world to figure out how to avoid a “tragedy of the commons.” This is the phenomenon of inevitable resource decline that occurs when large numbers of people seeking financial gain have access to a common property resource like an ocean fishery. Apparently, the Lofoten Islanders decided to carefully police themselves so that the harvest stayed within sustainable limits. They weren’t regulated from above, they just worked it out. They accepted some limits on their own gains to secure the long term communal good. The fact that the cod fishery remains strong today is evidence they got it right.

A week after returning from my visit to Vestvågøy, I glimpsed a headline about the U.S. National Oceanographic and Atmospheric Administration’s 2019 Arctic Report Card. Rising global temperatures mean the Arctic could now be emitting a billion or more tons of carbon into the atmosphere each year from the melting permafrost. It’s one of the climate change feedback loops people have been worried about for years. As the Arctic warms, it emits greenhouse gases that cause it to warm further, which causes more emissions of greenhouse gases, and so on.

To be honest, I could not read the story when I first saw the headline. I needed to steel myself a bit in order to be ready to absorb the news. Each story about the changing climate is becoming harder and harder to bear as it becomes more clear that the inevitable move away from the carbon economy is coming too little, too late. 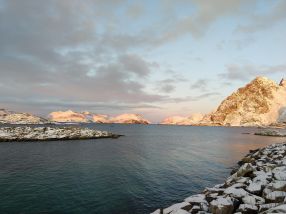 As I write this blog entry, nearly two hundred countries are meeting in Madrid to try to accomplish a modern day version of what Lofoten Islanders managed to do with their cod. UNFCCC negotiators are trying to avoid a tragedy of the commons. This time the common property resource is the atmosphere. The nations gathering in Madrid have not been taking a resource out of the common pool, they have been putting something harmful in. But the mechanism of the tragedy is the same. As long as each party has something to gain by pursuing their own interests, they will be motivated to continue their harmful behaviors. This is true even if everyone knows the inevitable result will be long term ruin for all.

Only by sitting down at the same table in places like Madrid is there a chance to settle on a plan to secure the common interest. Of course it is easier to feel this common interest if you are a fisherman sitting across the table from your neighbor with a hot cup of coffee in your hands. It is harder when you are a diplomat sitting in an air conditioned room in a European capital trying to represent a people located thousands of miles away. And when you know there are significant contributors to the problem not participating in the negotiations, the job is harder still.  But the fundamental question of how to feel a common purpose in order to do a difficult thing is the same.

This is where the two men walking with the cod across the mountains come back in. The image I have of this walk has beauty and depth. It also has many layers. It is an image of the staggering splendor of the landscape in Lofoten. It is an image of traditions practiced by multiple generations over many years. It is one of people living  in close concert with a natural world they plan to protect for the long run. It is an image of family, hospitality, and friendship…..of courageous people working hard on behalf of those they love.

Erik took us to the farmhouse because he will soon inherit this small patch of the Lofoten Islands from his mother. He plans to spend as much time as he can there with his family and children. This, among millions of similar stories from across the world about family, tradition, and place is what today’s tragedy of the commons threatens.

Such images should be more than enough to make us figure our current tragedy out. 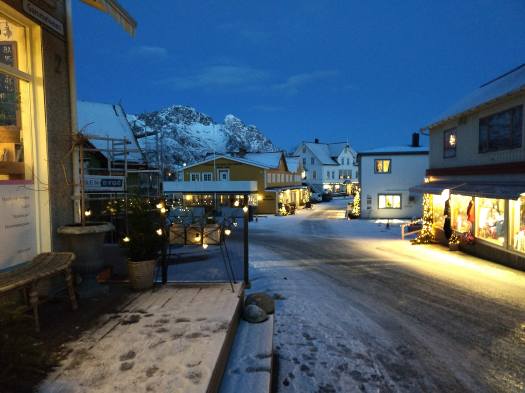 2 Replies to “Walking a Cod Across a Mountain”